What Does the Car and Lock Symbol Mean? – Explanation 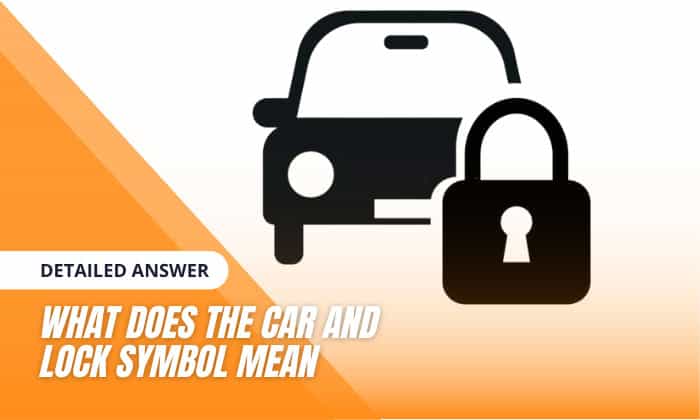 While driving, you suddenly encounter a car with lock symbol blinking on the dashboard and have no idea what it is and how to fix it.

So what does the car and lock symbol mean? This is a safety precaution against intruders as it indicates that the anti theft system symbol has been enabled. Read on to learn more about these signs.

What Does the Car With a Lock Light Mean?

You need not worry if a car with padlock symbol appears on the dashboard of your vehicle. It is your vehicle’s way of assuring you that the security system is active and working.

Such security light symbols differ in each car. Still, in most cases, they are usually represented by a car, a key, or a padlock.

The symbol is usually lit up in red car lock symbol. In some cars, it lights up in gold. This shows that the car engine will not start if the key fob is not around or is not detected by the vehicle’s sensors. In this way, thieves won’t be able to drive your car.

Immobilizers are designed to protect your car from thieves and intruders so they don’t attempt to hotwire your vehicle or use any method to force their way into your vehicle.

Should an intruder attempt to force their way into your car or open its locks without using the primary key fob, the car alarms will trigger.

Once the immobilizer detects that a different key was used, it will shut off the engine, and the orange car and lock symbol will appear on the dashboard.

However, do keep in mind that the car and lock symbol can still be activated even if the engine is on and running. This is due to the following factors:

A low battery for your vehicle means it is not getting enough power to properly function. Therefore it is possible that it loses the capability to detect and track your key fob. 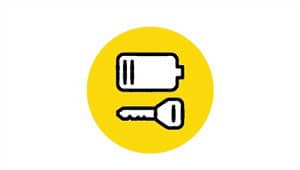 Your key fob may malfunction due to worn-out controls or low battery. Your key fob should be replaced if it still needs to be fixed after having a new battery.

There could be problems with the door lock actuator, which releases the door latches when a switch or signal activates. Another reason for this could be defective wiring or a blown fuse.

Possible Reasons for Lights Staying on When the Key is Close 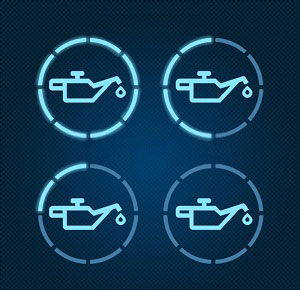 One of the many reasons for this could be concerns regarding your car’s oil pressure level. If it starts to reach low levels, it could affect the dashboard lights of your vehicle, particularly the oil pressure light to stay on when your engine is turned off.

Your ignition could be malfunctioning due to electrical problems. Because of this, your car lock sign on dashboard may still be on even if the engines have been turned off.

A blown fuse can also be the reason why dashboard lights are still on after you have switched off the engine.

If your fuse is compromised, it loses its ability to keep all electrical components and circuits working for your vehicle. 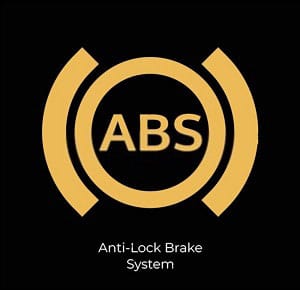 A faulty Anti-Lock Brake System can also be a reason for your dashboard lights to stay on. This could be due to low levels of hydraulic power or damaged wheel speed sensors.

The simplest way to bypass a car’s anti-theft system is to use your key fob to press and turn off the alarms.

If your car detects that the key fob battery is dead, then your car’s anti-theft system will activate. To this effect, the car gives you a “heads-up” that the system will stop functioning.

It is vital to be watchful of your key fob’s battery in order to avoid any kind of inconvenience.

3. Manually Turning the Ignition On

Turn the ignition on by inserting the key into the keyhole. Leave the key in place for about 10-15 minutes until it recognizes the key again.

The anti-theft light should also come off by this time. Use your key again to turn the ignition off, and wait a couple of minutes until the system resets.

By unplugging the car battery, the anti-theft system’s power will shut off. You can reconnect the battery after two minutes and the system should reset.

What to Do In Order to Reset Anti-Theft System in Chevy Silverado?

First, is to insert the key into the ignition slot and leave it on for about 10 minutes. This will automatically turn off the anti theft car with lock symbol on dashboard.

It is possible that your Ford F-150 has detected a false alarm that caused the anti-theft light to blink and prevent you from starting your engine.

Check your key fob’s battery. A low battery for the key can usually cause problems such as the anti-theft light turning on and the alarms going off.

Another factor could be because of damaged door locks. Signs of worn-out door lock cylinders or door handles can also trigger the anti-theft security system.

What is a service theft deterrent system?

When a thief attempts to break into your vehicle, this technology immobilizes the car engine. It will sound a beeping alarm, which can only be turned off with the key fob.

Now that you have learned what the car and lock symbol on dash means, it is an anti-theft security system to deter intruders. When the wrong key is used or someone forces their way in, the security system will activate and the engine will turn off.

It also gives you the peace of mind that the security system is active as long as there are no problems with your key fob and car’s battery to cause a false alarm.

We hope that we were able to enlighten you with today’s topic on what does the car and lock symbol mean.

How to Install a Line Lock? – 8 Steps You Need to Do

What Does a Diff Lock Do? – A Detailed Explanation

How to Install a Line Lock? – 8 Steps You Need to Do

What Does the Car and Lock Symbol Mean? – Explanation

How to Break the Club Steering Wheel Lock? – 2 Easy Ways

How to Unlock Steering Wheel Without Key? – 3 Methods

Can Your Car Get Towed for Expired Tags? (Updated in 2023)

How to Remove Spare Tire Lock without Key? – 6 Steps

A spare tire in your vehicle comes handy, especially when one of your wheels gets ...

What Causes Brakes to Lock Up While Driving? – 5 Reasons

Brakes play a vital role in cars and in driving as it is used to ...

4WD Lock vs 4WD Low: What is the Difference?

When driving your vehicle and taking road trips, it is inevitable that there will be ...